How to start Embeetle from the file explorer

To start embeetle on Windows, you can simply double-click embeetle.exe in the top folder of the Embeetle installation. You can also right-click embeetle.exe and select Pin to start or Pin to taskbar or Create shortcut to allow starting Embeetle from alternative locations.

On Linux, the situation is not that simple. The options depend on the desktop you are using.

A Linux desktop is an application that manages your desktop: it creates the desktop background, start menu, task bar … to allow you to start programs. Examples are Gnome, Cinnamon, Xfce, Unity. A desktop often comes with its own file explorer, like File (Ubuntu Unity) or Nemo (Mint Cinnamon). The same distro - say Ubuntu, or Fedora, or Mint - can often be installed with different desktops. For example, plain Ubuntu nowadays comes with Unity, but there is also Kubuntu (KDE + Plasma desktop), Lubuntu (LXQt desktop), etc.

In many situations, creating a desktop file is an alternative to starting Embeetle directly from the file explorer. Desktop files are described in a different post.

Below, I will describe some combinations that I have tried to start Embeetle directly from the file explorer. After that, I will explore desktop files.

In Ubuntu 22, double-clicking the embeetle script will open the script in a text editor, not start Embeetle. To run it, you need to right-click and select Run as a program. This opens a terminal and starts Embeetle; so you get two windows: one for Embeetle itself, and one for the terminal. AFAIK, there is no way to avoid the terminal, except by using a desktop file.

Mint Cinnamon uses the Nemo file explorer. The action taken by Nemo when double-clicking an executable file can be configured via Edit > Preferences > Behavior: 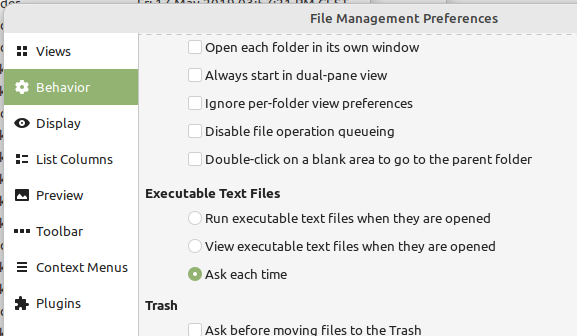 The default setting is Ask each time. You can also choose whether single-click or double-click will “open” the file.

The file explorer in Fedora is calles Files. It has similar options as Nemo (see Mint Cinnamon above), aceesible via the hamburger menu > Preferences > Behavior. Choose between Display, Run or Ask what to do.